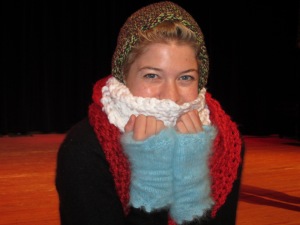 The temperature had dropped after the hurricane and we all came in winter coats and didn’t take them off until we got upstairs to the Stoltz Listening Room. It was cozy there, but downstairs was cold. Cavin Moore warmed up the kids by putting them through their dance routines.

Then Cavin worked with the “casserole ladies”, a group of women of a certain age who are interested in our widowed main character, Sandy Hawes (played by David Foster). Cool it, ladies. Martha got there first! In the original script these casserole ladies were supposed to be able to tap dance. Laura and I had an idea that the Talbot Tappers might try out for the parts, but by the time auditions came around, the tappers were already booked for the holidays. So our ladies will do some sort of routine. We’re just not sure what it will be yet. Cavin seems to have it in hand.

Upstairs Cecile Davis worked with the adult actors. In one scene Will Hawes (Casey Rauch) has to be angry by the scene’s end. Cece had him play the whole scene being angry over and over again. She called them “anger runs”. Casey was getting hoarse, but the red eyes in the photo below are from the flash. He didn’t get that angry. Then she had him play the scene in the regular way, but at the end the anger was so much more authentic. She said the anger runs were to get some body memory about anger for the times you need to call on this emotion. We are finding these mini acting lessons fascinating.

Laura has ordered a banner of the Santa Diaries poster she designed (see below). We’ll carry it at the head of the play people who want to walk in Easton’s Christmas parade on December 1. Some will be in period costumes and some not. Laura and I rode in the Christmas in St. Michaels Christmas parade last year – in a pink Cadillac – holding a poster for our book The Santa Diaries – Memories of a Small-Town Christmas. That little book was the inspiration for the play now in production. We get to be in another parade. Life is good!