Last year two of the Higgins family were in A Christmas Carol. Erik and his son Izaiah continue the tradition this year as both perform in The Santa Diaries.

Erik plays Josh Shankman, the Los Angeles business manager of Will Hawes. Since Erik is the first person to play this role he says that in rehearsals he is still struggling to find “that guy in me”. With Tim Weigand’s and Cece Davis’s help he is trying on different interpretations of the role until he finds the right fit. As one of the writers of the play, I always saw the character of Josh in red hightops. Does that help, Erik? If Italian loafers or Doc Martins work for you, you get to decide. It is your role!

Laura Ambler has written two original songs for the play. In one of them Erik gets to rap! He has an amazing singing voice, so we can’t wait to hear what he does with this.

Erik’s son, Izaiah, age 8, plays ballerina boy, number 1. He has some dance steps and a line of dialogue. This year’s performance follows on last year’s where he played one of the Victorian kids in A Christmas Carol. We don’t know what his costume will be this year, but don’t worry, Izaiah, it won’t be a tutu. 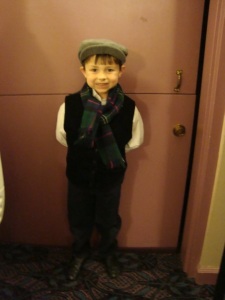 We asked Izaiah how he would know if he is successful in his role and he replied, “The thunderous applause when I bow!” Spoken like a true thespian in training. His father’s reply to that same question was, “I’ll get that tingling feeling.”

When asked what is your favorite thing about the holidays, Izaiah (age 8) told us, “opening presents, being home for Christmas, and remembering the true meaning of this special day.” His father said, “knowing that I’ll get new socks and underwear.” As a man, Izaiah has lots of things to look forward to in his life. Christmas socks and underwear is one of them, but perhaps starring in an Avalon production is another.