Use your imagination. Can you see it? The costumes, the scenery, the acting, the live animals? It’s The Santa Diaries!

Yesterday afternoon the Avalon Theatre sprouted walls from electrical cords and a metal ruler laid on the stage and doorways materialized from pieces of masking tape. In the back of the auditorium Marie U’ren was fitting cast members into costumes, and a dog waited patiently for his walk-on during the second act. Al Bond and Jessica Rogers were on a laptop working on sets and scenery which they told us would be like nothing that has been done at the Avalon before, and cautioned everyone not to say anything. We can’t because we have no idea what they’re doing, but Jessica promised spectacular.

On stage Director Tim Weigand was doing the first run through of the whole play. Assistant Director Cecile Davis and Producer Liza Ledford were tracking lines and reading the parts of people who couldn’t make rehearsal. All in all it was chaotic, but you can begin to see what it’s going to be like. Actors had a hard time remembering that the metal ruler represented a wall so it got stepped on alot as people transported themselves through the invisible walls. We heard actor’s calling out, “Where’s the door?”

Cece Davis posted a photo gallery from rehearsal on The Santa Diaries Play FB page. When she took off her Assistant Director hat and put on her photographer hat, she took some beautiful black and white pictures 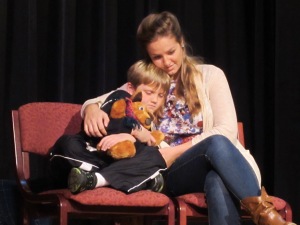 Most of the people are off book by now, but not quite 100%, so there were some improvised lines. That’s a problem when the line you are supposed to say is important to the dialog that follows. Cues get missed.  Picking up the pace is an ongoing issue. It will be helpful when people know where the walls of the set are, but despite all the moving parts we could feel a coalescence of the effort of so many people. We are using our imagination and the costumes, the scenery, the acting and the live animals will all be where they are supposed to be when the play opens on December 16th.