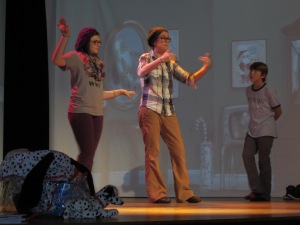 The Santa Diaries is lucky to have a gifted choreographer working with the cast. Cavin Moore, from Cambridge, Maryland, graduated in 2008 from Sarah Lawrence College with a B.A. in dance performance and composition. While at Sarah Lawrence, Cavin choreographed several pieces for student showcases and collaborated on several theatre projects including a stage version of the 1900’s to 1940’s comic strip “Krazy Kat” created for the Downstage Theater Fall Season.

Cavin has performed at INTAR Performing Arts Center and at The Rover Soho in New York City. In 2011 she choreographed for Kaleidoscope Children and Youth Productions of Salisbury, Maryland and worked on The Avalon Foundation’s production of  “A Christmas Carol.” Most recently, Cavin choreographed The Underground Actors’ production of “Pippin.”

Cavin performs with Floofie Films; a production company founded in 2009, along with her sister, Henley Moore, and Cecile Davis. Their latest project is the short movie musical “Jolene” which premiered at The Chesapeake Film Festival this past fall.

Watching Cavin work with the kids and the adults has been awe inspiring. She is a wonderful teacher with endless patience. The Santa Diaries is lucky to have her on our team. In the photo above, that’s Cavin in the center. Shall we dance?