Reindeer are featured in Martha’s Christmas decorating efforts in the new show – A Christmas Wedding – so the Merlin Players sent out a tweet.

Laura has been doing some rear projection images for the new show. She put a bulletin board on the wall of the community center where much of the action takes place. It’s an homage to sweet potato hot dish recipes, auditions for  the Christmas Carol — the perennial holiday show in our imaginary small-town — and a photo of the playwrites with Merlin Players director Julianna Skluzacek.

In twenty days we’ll be in Crawfordsville, Indiana watching the opening night performance of The Santa Diaries (the original show) performed by the Sugar Creek Players. Life doesn’t get much better for writers. 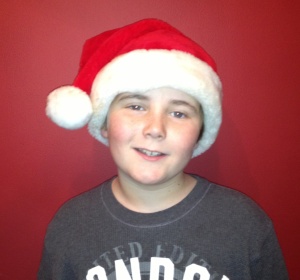 Seth and Selene will be walking in the Christmas in St. Michaels Christmas parade Saturday, December 8. This photo is of Selene getting ready to march in the Easton parade last Saturday night.

In the St. Michaels parade the kids will be wearing elf vests and Santa hats. This day time parade is great fun.

Maybe we will be by the llamas. I am told by parade master, Mert Jarboe that he has to keep the llamas away from the horses. They don’t get along! I know llamas are in the camel family and horses are, well, horses, but hey, guys, where’s your Christmas spirit?