Reindeer are featured in Martha’s Christmas decorating efforts in the new show – A Christmas Wedding – so the Merlin Players sent out a tweet. 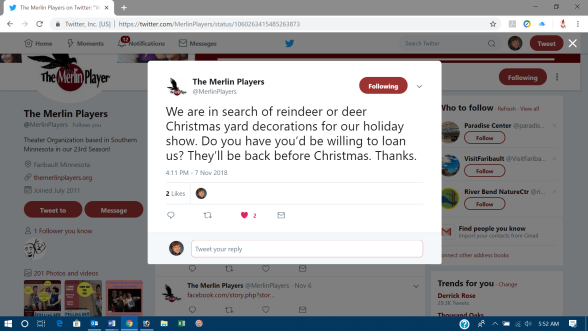 Laura has been doing some rear projection images for the new show. She put a bulletin board on the wall of the community center where much of the action takes place. It’s an homage to sweet potato hot dish recipes, auditions for  the Christmas Carol — the perennial holiday show in our imaginary small-town — and a photo of the playwrites with Merlin Players director Julianna Skluzacek. 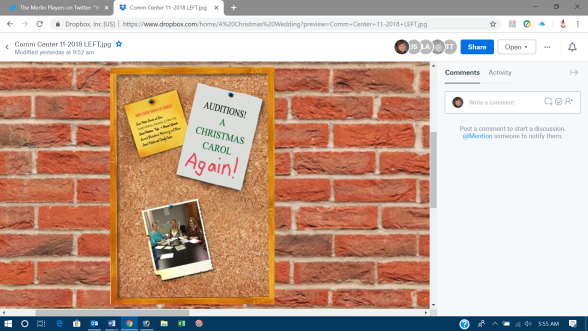 In twenty days we’ll be in Crawfordsville, Indiana watching the opening night performance of The Santa Diaries (the original show) performed by the Sugar Creek Players. Life doesn’t get much better for writers.

Mala Burt and Laura Ambler want to let you know…

The Santa Dairies lives on and in 2018 will be produced by the Sugar Creek Players in Crawfordsville, Indiana.

Director Keith Strain gets community theater. He has cast 42 people in his version of the play. In the community theater featured in the play everyone who wants a part gets one. Especially the kids. Their parents, aunts and uncles and grandparents all buy tickets. Laura and I will be attending two performances the first weekend.

In Bath, Maine the Chocolate Church Arts Center is also producing the play. We will be  attending two performances there as well. 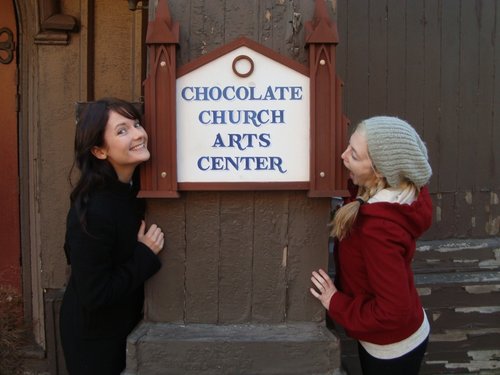 Our new play — A Christmas Wedding: The Santa Diaries 11 —  will premier in Faribault, Minnesota this Christmas. The sequel was commissioned by the The Merlin Players who performed the original in 2014. It features the same cast of characters five years later. Who can resist a simple small-town Christmas wedding that is derailed when it becomes a reality TV show?

Many of the people who played parts in the original play are back. Here are some of them at the first read through. We love you guys and can’t wait to see you on opening night. We’ve booked our flights and rented a house because we are traveling with an entourage this time.

I’m hoping to get photos and some bio information of the casts in the various productions for the blog. Head shots if you have them. Acting history or newbie status. Rehearsal photos would also be great. You can always send them directly to me at malasburt@gmail.com or santadiariesplay@gmail.com.